Feature scoring is a methodology for identifying what model inputs (in machine learning terminology, “features”) have the greatest relationship to the outputs.
The relationship is not necessarily linear, but rather can be any arbitrary linear or non-linear relationship. For example, consider the function:

We can readily tell from the functional form that the B term is the most significant when all parameter vary in the unit interval, as the amplitude of the sine wave attached to B is 1 (although the relationship is clearly non-linear) while the maximum change in the linear component attached to A is only one half, and the output is totally unresponsive to C.

To demonstrate the feature scoring, we can define a scope to explore this demo model:

And then we will design and run some experiments to generate data used for feature scoring.

The feature_scores() method from the emat.analysis subpackage allows for feature scoring based on the implementation found in the EMA Workbench.

Note that the feature_scores() depend on the scope (to identify what are input features and what are outputs) and the experiment_results, but not on the model itself.

We can plot each of these input parameters using the display_experiments method, which can help visualize the underlying data and exactly how B is the most important feature for this example.

One important thing to consider is that changing the range of the input parameters in the scope can significantly impact the feature scores, even if the underlying model itself is not changed. For example, consider what happens to the features scores when we expand the range of the uncertainties:

The pattern has shifted, with the sine wave in B looking much more like the random noise, while the linear trend in A is now much more important in predicting the output, and the feature scores also shift to reflect this change.

We can apply the feature scoring methodology to the Road Test example in a similar fashion. To demonstrate scoring, we’ll first load and run a sample set of experients.

With the experimental results in hand, we can use the same feature_scores() function to compute the scores.

By default, the feature_scores() function returns a stylized DataFrame, but we can also use the return_type argument to get a plain ‘dataframe’ or a rendered svg ‘figure’.

The colors on the returned DataFrame highlight the most important input features for each performance measure (i.e., in each row). The yellow highlighted cell indicates the most important input feature for each output feature, and the other cells are colored from yellow through green to blue, showing high-to-low importance. These colors are from matplotlib’s default “viridis” colormap. A different colormap can be used by giving a named colormap in the cmap argument.

You may also notice small changes in the numbers given in the two tables above. This occurs because the underlying algorithm for scoring uses a random trees algorithm. If you need to have stable (replicable) results, you can provide an integer in the random_state argument.

Then if we call the function again with the same random_state, we get the same numerical result.

The correct interpretation of feature scores is obviously important. As noted above, the feature scores can reveal both linear and non-linear relationships. But the scores themselves give no information about which is which.

In addition, while the default feature scoring algorithm generates scores that total to 1.0, it does not necessarily map to dividing up the explained variance. Factors that have little to no effect on the output still are given non-zero feature score values. You can see an example of this in the “demo” function above; that simple example literally ignores the “C” input, but it has a non-zero score assigned. If there are a large number of superfluous inputs, they will appear to reduce the scores attached to the meaningful inputs.

It is also important to remember that these scores do not fully reflect any asymmetric relationships in the data. A feature may be very important for some portion of the range of a performance measure, and less important in other parts of the range. For example, in the Road Test model, the “expand_capacity” lever has a highly asymmetric impact on the “net_benefits” measure: it is very important in determining negative values (when congestion isn’t going to be bad due to low “input_flow” volumes, the net loss is limited by how much we spend), but not so important for positive values (nearly any amount of expansion has a big payoff if congestion is going to be bad due to high “input_flow” volume). If we plot this three-way relationship specifically, we can observe it on one figure: 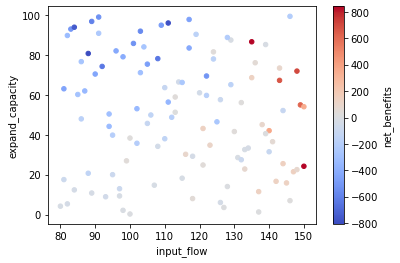 Threshold scoring provides a set of feature scores that don’t relate to the overall magnitude of a performance measure, but rather whether that performance measure is above or below some threshold level. The threshold_feature_scores() function computes such scores for a variety of different thresholds, to develop a picture of the relationship across the range of outputs.

This table of data may be overwhelming even for an analyst to interpret, but the threshold_feature_scores() function also offers a violin or ridgeline style figure that displays similar information in a more digestible format.

In these figures, we can see that “expand_capacity” is important for negative outcomes, but for positive outcomes we should focus more on “input_flow”, and to a lesser but still meaningful extent also “value_of_time”.

Calculate feature scores based on a design of experiments.

This function internally uses feature_scoring from the EMA Workbench, which in turn scores features using the “extra trees” regression approach.

Compute and display threshold feature scores for a performance measure.

This function is useful to detect and understand non-linear relationships between performance measures and various input parameters.